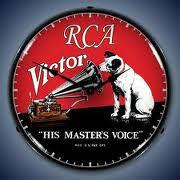 If you've ever wondered about the beginning of recorded music, you should know about the Victor Talking Machine Company. Victor was the leading American producer of phonographs and phonograph records from 1901 to 1929. The company was headquartered in Camden, New Jersey.

The brand's icon was "Nipper," has been claimed in various sources to be a Jack Russell Terrier, a Fox Terrier, or an American Pit Bull Terrier. It doesn't matter. Nipper was the dog that served as the model for a painting titled "His Master's Voice," by Francis Barraud.

Nipper was an icon used by many audio recording brands, including Victor Talking Machine, His Master's Voice, HMV, EMI, RCA and RCA Victor, and JVC. In 1898, Barraud painted a picture of Nipper listening intently to a wind-up Edison-Bell cylinder phonograph. At the time, critics said "Dogs don't listen to phonographs." That may or may not be true. But today, millions and millions of people listen to music everyday through a variety of technologically brilliant sources. And it all started with a dog. Bark if you love Mozart or Madonna.